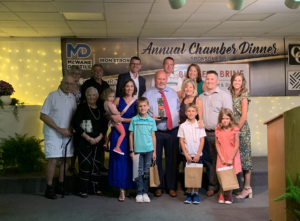 To quote Kool & The Gang, it was time “Celebrate good times!  Come on!”

It was a night of awards, recognition, and celebration at the Coshocton County Annual Dinner last night at Lake Park Pavilion.  The event, which was held virtually last year, was back to an in-person event.  The event gives the Coshocton Chamber a chance to celebrate the accomplishments of the community…but also its many leaders.

Executive Director of the Coshocton County Chamber of Commerce, Amy Crown, called the event “one of the most positive events of the year.”

In addition to recognizing several organizations that have passed milestones, there were 4 local award winners announced.  Those winners included:

Employee of the Year:  Toni Markley

The Coshoctonian is a lifetime achievement award for Coshocton’s leaders.  As such, it is one of the highest honors the community gives.  So here is the full speech, given by Kirby Hasseman, last night at the Annual Dinner.

The Coshoctonian is one of the most prestigious honors our community recognizes.  The award recognizes the totality of achievements from any one individual, and is, in a sense, a lifetime achievement award for Coshocton’s leaders.  In short, those who have been recognized as Coshoctonian have made a difference in our community.  Coshocton is a different, and better, place because they were (and are) here.

This can certainly be said for this year’s recipient.   The best communities don’t just happen…they are cultivated.  They are grown intentionally.  Seeds are planted.  These seeds are cared for until they take bloom.

This year’s recipient of the Coshoctonian Award is Judge Tim France.

Judge Tim France truly is a person who plants seeds…and helps them grow.    He has done this for years in Coshocton County through many different roles of service.  You might know him as one nominator called him “the judge who plants flowers downtown,” (and we will get to that) but there is so much more.

But first, he is a grower of people.

In his role as Municipal Court Judge, Judge France sees people from all walks of life.  As most would tell you, many people who visit that courtroom are good people that have made some “challenging” choices during that season of their life.  Some people in this role might become bitter and jaded.  But that does not seem to be the case with Judge France.  Multiple nomination letters came from people who were on the “wrong side of the bench” when they first met him.

One nominator credited Judge France with actually saving his life.  Directly from his letter, he says, “He saw a strength that I didn’t know I had.  As a result of my interaction with Judge France, I am now alive, clean and sober, and a productive member of society.”

A seed of hope is planted.  A legacy of life created.  And as this same recipient said, he was not the only one.  There are plenty of stories just like this one, where Judge France took the time to care for and cultivate people in Coshocton County.

He has also helped to cultivate organizations.

Judge France has also been a tireless advocate for local organizations as well.  During his time as an attorney in Coshocton County, he took the time to serve on many boards in the community.  One such organization where Tim served for years is Health Services of Coshocton County.  As former Coshoctonian Recipient, Barb Emmons stated, “To say he was involved really understates the role Tim played in the organization.”

Barb also said that she loves to work with Tim on any project because once he is in…he is all in.

This explains why so many people nominated Judge France for this award.  From soccer referee to an attorney to advocate for Children’s services, to Rotary Club member (and president) to Honorable judge…when Judge Tim France decides to commit himself to a project, he is committed to watching it flourish and bloom.

Which leads nicely to…

It turns out that Judge Tim France is known a bit for planting flowers in Coshocton County.

People from all over the country who visit our lovely area comment about the flowers that you see coming into town and the amazing plantings all through the downtown area.  These nationally award-winning flowers are absolutely stunning.  And everyone in the community needs to thank Judge France for the contribution they play to Coshocton County.

As I understand it, Tim loved to spread the beauty of landscaping for years.  He got involved with the local track booster by creating a flower sale (that went on for years).  Judge France then would plant flowers in the downtown area and in the old cement planters downtown.

One year, Tim became fully engaged when in mid-July the plants had all died from lack of maintenance.  Now a master gardener, Judge France found this unacceptable, so he started to fill 5-gallon buckets with water, load them into his little red S-10 pick-up truck, and drive downtown to water them by hand 2 days a week!

Even Tim’s wife Daphne thought this was extreme.  She told me “I thought he was totally crazy!”

By doing this labor-intensive work, Tim was able to keep the plants alive…but not thriving.  So, he continued to plant seeds.  He worked with the local Rotary club to donate plants and convinced the City of Coshocton to allow the use of spigots and city water.

Not long after, Judge France was approached by a new organization in Coshocton County called Coshocton In Bloom.  They wanted him to help them with the hanging planters you see on Main Street today.  He turned them down initially because he didn’t think he would have the time to do that and keep up with his current city plantings.  He later agreed as long as he “was NOT in charge.”

3 years later…he was elected President of Coshocton In Bloom.

Since these humble early beginnings, you could say that this program has taken off.  Judge France has raised money from some amazing local organizations to have a gator that water the flowers nearly every day.  He has assembled a team of volunteers that make it happen. And he also organized a fundraiser to replace the old containers on Main Street with new planters best suited for our area.

Judge France has planted seeds that are certainly continuing to grow.

And that’s not just our opinion!  Coshocton County has received numerous national awards from America In Bloom for our incredible floral displays.

And Judge France continues to plant seeds for the future.

Coshocton In Bloom recently announced that they were purchasing the Clary property on Denman Avenue.  The idea is they will create multiple greenhouses to service the needs of the community for creating flowers and plants in Coshocton County for our community…for years to come.

Planting those seeds.  Cultivating ideas.  Caring for people and projects around Coshocton County.  This is how the people of a community can make a difference.  Judge France is giving us an example of what a person can do when they are willing to create a vision and to get some dirt under their fingernails to create it!

Thank you, Judge France, for your service to Coshocton County…and for planting those seeds.

Please join me in congratulating Judge Tim France as the 2021 Recipient of the Coshoctonian Award.